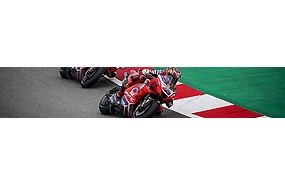 Sport is a passion that will never leave us! It was born just a few years ago and since then has grown as a constant commitment, supported by the whole group.

This strong connection has permitted PRAMAC to become a part of the MotoGP world championship. It is the passion that has always distinguished the company founded in 1966 in Casole d'Elsa and that has become a multinational leader in the field of energy and movement thanks to innovative and dynamic ideas, including the choice to link its brand to prestigious and important companies such as Ducati for the past 10 years. The biggest challenge started with the premier class of MotoGP back in 2002, when PRAMAC became the owner of a motorbike team. Tetsuya Harada, Makoto Tamada, the corsair Max Biaggi and the rider with the highest number of appearances in the MotoGP, the Brazilian Alex Barros, are some of the biggest names that have helped to bring up the company name. All great riders who were the protagonists of the history of the World Championship on two wheels, the most important and famous championship.

In the 2014 season, the Team prided itself with the Italian-Colombian duo composed by Andrea Iannone and Yonny Hernandez, confirming to strongly believe in growing talents. In the 2015 season, in fact, Andrea Iannone was called to ride the official Ducati bike and another Italian rider, Danilo Petrucci, took his place in the Team. Again, PRAMAC’s choice turned out to be a good one as "Petrux" has become the protagonist of a great championship, bringing back the team on the podium after 7 years, finishing his extraordinary Silverstone GP race in second place, after starting from the eighteenth place on the grid.

The 2016 season represents a great achievement for PRAMAC that celebrates 15 years of presence in MotoGP. With the confirmation of Danilo Petrucci, the other Ducati Desmosedici GP bike was given to Scott Redding, 23-year-old's English talent and the youngest rider in the history of MotoGP to win a Grand Prix (Donington 125cc class, only 15 years old and 170 days).

The 2017 one was a thrilling season for the Octo Pramac Racing team, who obtained a superb 5th place in the Moto GP world championship. Danilo Petrucci and Scott Redding returned for the 2017 season to represent the Tuscany-based team’s colors. The Terni native, placing 8th in the individual championship and making podiums in Mugello (3rd place), Assen (2nd place), Misano (2nd place) and Motegi (3rd place), has been the undisputed protagonist of the season.

For the 2018 season, Pramac waves goodbye to Scott Redding and welcomes the talented Australian rider Jack Miller to the team, hoping to build on the fantastic 2017 year. Riding his Desmosedici GP 18, Danilo Petrucci will look to impress even more in Alma Pramac Racing’s 2018 campaign.

The group spirit is to compete with an ever-changing scenery, animated by motivation and impulses that are close to the company philosophy and that help supporting its business with conviction and determination, because "it is always a new exciting challenge, full of dreams and passion".

Paolo Campinoti, PRAMAC CEO, is the creator of many of the initiatives dedicated to the sports world: "We made the first step towards the sports world in 2002, timidly, approaching the MotoGP completely unfamiliar to that to which we were getting into. Then we found out an exciting world, very challenging, 100% consistent with the philosophy of our company. We grew up and we got the first results thanks to the big names who have raced for us."

PRAMAC is synonymous of challenge, competition, and desire to get in the game with the objective to overcome and past results, always.